Once (ok, let’s be honest, not just once) I was thinking, “Why not to get rid of estimations?”. I heard a lot from the developers in our company that they hate estimating. That is usually a very painful process for a project manager, too. Not only because of the process itself, but because of what happens afterwards. If you worked on more than one project, you definitely know that the estimation your team created won’t be ok for business people. They certainly know that this feature is very easy and that story can be done in a day… Or, “My colleague – he is a developer himself – thinks this can be done in a week!”. They all need hours, exact numbers and deadlines. Team wishes not to provide that.

Why we can’t get rid of estimations

Estimation process is not about providing the number of hours team would spend on certain task. Team can spend 4 hours discussing a pack of backlog stories and only 30 minutes on estimating them using planning poker or size markers. The main thing that happens during the estimation process is the development of common understanding of an issue/story. We discuss details, clarify the vision of the architecture or some business logic and build the “model” that is visible for the whole team. Only after that we can come up with some numbers. 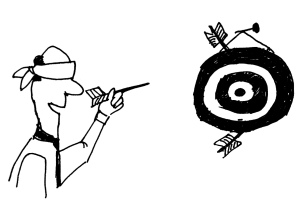 The other big problem can be the technical debt – team should have the clear vision of how big is the tech debt and what is the code quality. Let’s imagine the team is not familiar with the code base at all – it results in making commitments without clear understanding of what work actually needs to be done.

Our customers definitely need estimation. How can they plan if they don’t know when the work could be done and how much it would cost? They push the teams to provide the estimations in hours so that they can count the costs.

Developers hate estimation in hours, as they usually fail in giving the right numbers. Ok, as a project manager, I double their estimation before providing it to the customer. But it is still not enough sometimes and does not add any transparency to the process.

But I found out a surprising thing – customers don’t really care about the hours, as their final goal is to get costs and timing. If you provide them cost and timing, they don’t care how you estimate – in store points, hours or bananas. They would bless you if you could provide them an up to date information, as backlog changes often.

What I hate about estimations

So, I found out that I am not against estimation and understand why we need that. But what does make me crazy when it comes to estimating?

Try to avoid these 🙂

5 thoughts on “It seems that I hate estimations. Really?”