Finally, it’s my turn to write about the dead projects. Mostly because I am taking part in more than one now. I collected my observations during the last months and am ready to share them. Let’s start from the most important thing – how to realize that you are working in the zombie project. Zombie – because you can’t say, it’s dead – sometimes a huge team is working on it and you can swear you hear it’s breathing. But it can be only the sound of wind in the tubes.

How to find out that your project is a zombie

Yes, that simple. Just ask the team. They usually know, that the project is dead. During the retrospective ask every member one good question: “Do you believe we would reach the project goals?” Sometimes they can even ask you “What are the project goals?”. It most of the team says “No” – you are in trouble. They are fighting for something they don’t even think is possible to gain.

Too often the timing plan is to tough, managers just push us to accept it. Using threats, using “but you are a professional! senior developer. I know senior developer can do that!”, bonuses, etc. Team says “yes”, but is not believing it is possible. Also the problem can be in technologies – you are using some old ones, which have restrictions, so the goal is not possible to reach. Budget is the same as time. If you hear “It is a high competitive environment, we had to provide a discount to win this deal!” – the budget is not possible to fit. Naive promises are made too often.

The reliable sign of the problem project also can be the lack of staff or resources. If you come and see that the complex project(after you read the project info you imagine smth like a year of development) is developed by 2 developers – middle and junior one – you are definitely in trouble) Especially if they say “They don’t allow us to hire QAs, as they think we should write the code without bugs, not waste time on testing.” Run, just run. Your life is too short.

2. It is not moving or moving slowly

When the team says “But we need to do a refactoring to implement it and not to ruin everything” the answer is “I need that on Monday! I don’t want to hear about the programming details, I just need it!”. Continue doing that and once you’ll get the dead code. 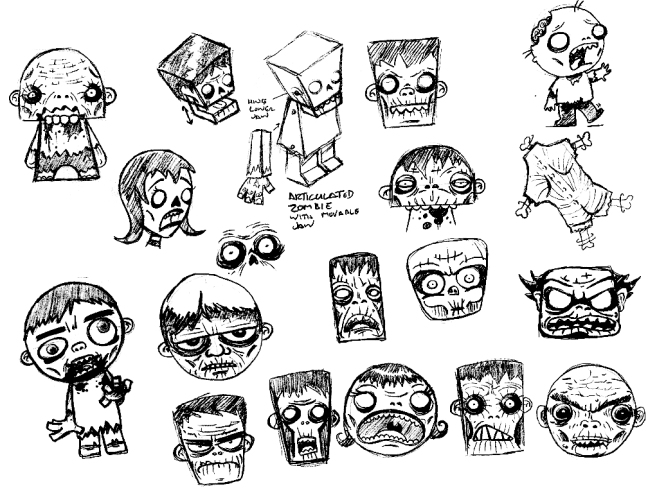 Let’s look at the lifecycle of the dead code projects:

Every touch can ruin the “so-called” stable system. Managers are talking a lot about “stability”. Code inside is a mess. If you take a decision to rewrite the project – go to 1, if you are going to “refactor it all” – go to 2.

3. It is controlled by the superpower

You are looking at your zombie and see that it makes some irrational movements, decisions seem to be made somewhere else, not in his dead brains? Definitely, it is politics.

I think it the most dangerous thing for the projects – politics. You think such problems can be found in the projects which company develops internally? No, even in outsourcing you can come across that. When there is more than 1 person involved – politics can appear and ruin everything. My projects, which I used as an example for study, had the worse case – they had investors who ruled the product’s development. And I was surprised to see that it looked like they didn’t want to have the successful products – a lot of decisions were irrational and strange to me. But definitely there was some reasons (I believe nothing happens just by itself, there should be a reason 🙂 I am sure “politics” took place. Especially after my colleagues started mentioning “Oh, doesn’t be surprised, it’s all politics” (Oh, you thought that I was so smart to get it by myself? 🙂

Software developers usually say that they won’t get involved in politics – and development teams of such projects create special “cocoon” around the team and treat everybody inside as “good” and all outsides, especially who play political games – “bad”. Project managers in this case have to choose and start playing for the team or against it. During retrospectives you can hear “Oh, they can do everything they want there, on the top. But we here have our tasks do develop, let’s concentrate on them.”

All possibly started with naive optimism “We can do it over the weekend!”. But now they can’t make the important decision – what to do with this Frankenstein. So everyone just make the image that everything is ok.

How to cope with the dead project? Use electricity, so it will move during the release demo. Deliver it to the production server and forget about it. *sarcasm* Next time I will write my thoughts on what to do with zombie or zombie – like projects.

This time I will only give an advice (personal opinion) how not to get in a zombie project. So, there are some words or facts which can rise a flag for you during the interview: